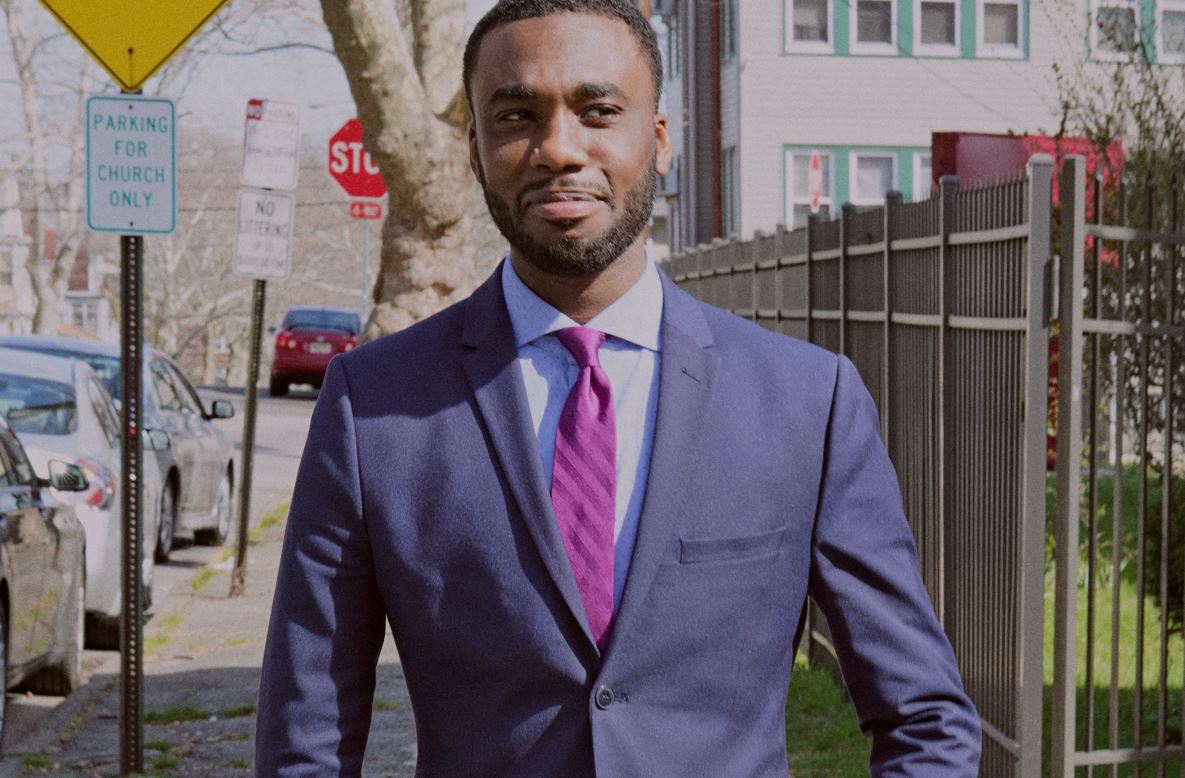 What do M&A jobs involve?

A job working in mergers and acquisitions (M&A) is one of the most sought-after and high-profile roles in investment banking.  Senior M&A bankers travel the world and advise on the world’s biggest and most complex “deals”, re-shaping entire industries.  The COVID 19 pandemic might have brought a temporary halt to the globe-trotting, but the M&A market has since rebounded to near record levels of activity.

M&A bankers are professional advisors. They operate at the highest levels, working with large global companies (corporates as they’re known in banking), advising chief executives how best to position their organizations for the future. Unlike management consultants, who help companies determine and implement the best strategy without necessarily changing the company’s component parts, M&A bankers drive strategy through structural change. They encourage the companies they’re working with (clients) to join together with other companies as equals (a merger), to buy and control a smaller company or part of a company (an acquisition), or to sell part of their own operations (a disposal).

Mergers, acquisitions and disposals happen for different strategic reasons. For example, a client may decide to merge with a rival operating in the same business area in order to increase its market share. This is known as a horizontal merger. Alternatively, a client may decide to acquire one of the companies that supplies the components necessary to fabricate its product. This is a vertical merger. There are also conglomerate mergers, when a company merges with or acquires a firm operating in a totally different market. And there are congeneric mergers, which take place when companies are in the same industry but offer different products. Conglomerate mergers have the advantage of allowing clients to enter completely different markets. Congeneric mergers bring advantages like established distribution channels, or whole new product lines.

Globally, the top three banks in M&A are Goldman Sachs, Morgan Stanley and JPMorgan, as shown in the chart below. These are the banks that work on the biggest and the most complex deals, often involving buyers and sellers in different countries.  But there are a number of other big U.S. and European banks that are also active in M&A, and many also lend the money to finance the deals. 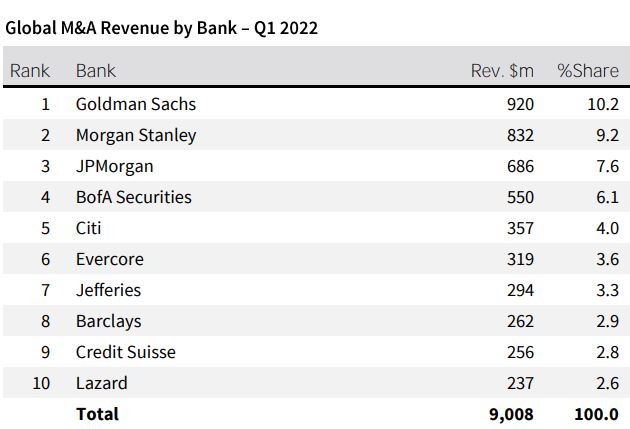 While the biggest, multi-billion dollar deals grab the headlines, the majority of deals are below $500m in size, and there are a number of so-called mid-market M&A firms which earn good money advising on these deals.  There is also a large number of so-called boutiques, which are independent, privately-owned firms run by a small number of senior M&A bankers who’ve left big banks to set up on their own. Boutiques are typically pure advisory houses – unlike banks, they don’t actually provide the financing for deals themselves. The best known ones include Centerview Partners, Moelis & Co, Greenhill, Evercore, Perella Weinberg, and Robey Warshaw, but there are hundreds out there.

Top M&A bankers are known as rainmakers for their ability to land big deals, but beneath the glamour the hours are long and junior bankers have to spend years learning their trade before they can generate their own deals.

What does an M&A analyst actually do?

M&A analysts are the lowest rung in the banking hierarchy. Working as an analyst in a M&A division means being flexible because you can work on multiple projects at any point in time.  You will be working on live deals and pitching new for ones.

When you’re working on a live deal, you’ll be involved in deal execution or helping a client buy or sell an asset, called buy-side or sell-side mandates. When you’re pitching you’ll be preparing documents for more senior bankers to pitch to clients as they try to persuade clients to do new deals.

“Day-to-day life as an M&A analyst largely depends on the deals you are working on,” says Joe Hannon, head of UK mergers and acquisitions at Credit Suisse. “Broadly speaking, mornings and early afternoons involve client interaction, status and/or diligence calls and discussions to agree on the workstreams the deal team should focus on as well as next steps. By the afternoon or evening, meetings are less frequent, and you can focus on progressing on the deliverables, which can range from excel modelling to preparation of marketing materials.”

How hard do you work in an M&A job?

In the past year, the arduous nature of work in some M&A teams has become apparent. As deals boomed after the COVID pandemic, some junior bankers at Goldman Sachs complained that they were working more than 100 hours a week and on the verge of collapse. M&A analysts at other banks voiced similar complaints and the banking industry responded by increasing junior bankers’ salaries and making sure juniors get some time off at weekends. Very long working hours (75+ a week) are, however, still the norm.

Why do junior M&A bankers work so hard? One reason for this is that M&A is a fast-paced, ever-changing work environment and the intensity of the job will depend on the type of project you are working on – deal execution tends to be unpredictable by nature as it’s a live situation, whereas business development / pitching tends to be more predictable.

M&A is also a client-driven activity. As an M&A banker you’ll be more at the beck and call of clients. Hours are especially long when deals reach a crunch point, or when you are working on multiple transactions.  “Working full weekends and very late nights may occasionally happen around a particular deal, but these hours are not the norm,” says Hannon.

There are upsides. One Morgan Stanley banker told us that “M&A Analysts have the opportunity to manage their own time and as long as the work gets delivered to a high standard you have the freedom to fit the job around your personal commitments.”

How do you get into M&A? What's the career path?

One of the benefits of a career in M&A is that there’s regular and steady progression and a clear promotion path from Analyst to Associate to Vice President (VP) to Director to Managing Director (MD) (although the titles vary at different banks). The time it takes to reach the top rung varies, but as a rule of thumb it’s around 15 years. You typically start out as a graduate on a trainee scheme, at analyst level. Failing that, you can join as an associate after a top MBA course.

“Meritocracy is key to this path and we are passionate about giving our people the career opportunities to best realise their potential,” says Hannon.

As your M&A career develops, your job becomes increasingly client-facing. The role evolves from being technical and analysis-driven to becoming strategic and advice-driven.

M&A jobs offer a wide variety of exit options. Many graduates stay at banks for the two year M&A training program and then leave (if not even sooner) for jobs in private equity, hedge funds, corporate development teams in large companies, or even consulting firms.

Which skills do you need for a career in M&A?

If you want to work in M&A, you will need to be able to work autonomously. A member of the global M&A team at Morgan Stanley said: “M&A Analysts are expected to get up the curve in terms of financial analysis and technical skills in a short period of time, and the role also requires a degree of independent and proactive work (for example reading broker notes) to stay current on the market environment.”

Alongside independence, proactivity and having a desire to learn, M&A Analysts need to be confident with numbers and have a quantitative mindset. They also need to have good people skills and to be able to communicate and interact with people confidently. Ultimately this is a client-facing job and clients look to M&A bankers to provide judgement and advice.

Hannon says good analytical skills are essential along with a strong work ethic, a and a good attitude “A good banker needs to be committed to the job and the deals they are working on,” says Hannon who also says a good attitude is vital. “It is essential to maintain a positive attitude as you are constantly interacting with others; a bad attitude could be detrimental to the whole team.”  Hannon also says a sense of humour is also essential, although that probably won’t be enough on its own.

Salaries and bonuses in M&A

M&A jobs pay large salaries and bonuses. Following complaints about working conditions now offering first year analysts a base salary of $100k (£72k), before bonuses. Basic pay increases as you rise through the ranks, with first year associates typically earning around $175k, while directors can earn a basic salary of $250k. Managing directors can command a salary of $500k, depending on the firm.

When you work in M&A, your pay isn’t just about your salary. Your total compensation (“comp”) also includes a bonus.  For M&A bankers the size of the bonus depends on fees paid to the bank when a corporate it is advising completes a M&A transaction. Fees vary depending on the size and complexity of the deal, but a rule of thumb is that fees equate to between 0.5% and 1% of the value of the transaction.  Then the proportion of the fee allocated to the bonus pool is shared among the team that worked on the deal, with the managing director or MD who originated or won the deal earning the most. Bonuses at most banks are paid predominantly in shares, with a smaller cash element. Bonuses can be 80% of your salary as an analyst, and are even greater than your salary as you become more senior.

The eFinancialCareers salary and bonus survey suggests that after three years to four years as an M&A banker in London, you can expect to earn as much £200k ($270k) as a first year associate. In America, some first year associates are paid salaries alone of $200k, plus bonuses

Pay is typically highest in the most prestigious M&A boutiques like Evercore, PJT Partners and Centerview.

Photo by Alex Robinson on Unsplash